Above, Burns Cottage, birthplace of Robert Burns on the day a 'blast o' Janwar' win' blew hansel' on the twenty-fifth of 1759 in Alloway, Ayrshire. Also site of the first Burns Supper held in 1801, a celebration continuing around the world to commemorate the life and works of this world renown Scottish bard.

In order to commemorate our beloved Robert Burns and at the same time, one of our former Clan Chiefs, James Cunningham, 14th Earl of Glencairn, 14th Lord Kilmaurs, Captain of the West Fencible Regiment and Representative Peer of Scotland who died in 1791 and about whom Robert Burns wrote this poem in that same year, following the untimely death of his patron, the following is reprinted here for your enjoyment in its Scottish dialect.


The wind blew hollow frae the hills;
By fits the sun's departing beam
Look'd on the fading yellow woods
That waved o'er Lugar's winding stream.
Beneath a craigy steep, a bard,
Laden with years and meikle pain,
In loud lament bewail'd his lord,
Whom death had all untimely taen.

He lean'd him to an ancient aik,
Whose trunk was mould'ring down with years;
His locks were bleachèd white wi' time,
His hoary cheek was wet wi' tears;
And as he touch'd his trembling harp,
And as he tun'd his doleful sang,
The winds, lamenting thro' their caves,
To echo bore the notes alang.

Ye scatter'd birds that faintly sing,
The reliques of the vernal quire!
Ye woods that shed on a' the winds
The honours of the agèd year!
A few short months, and glad and gay,
Again ye'll charm the ear and e'e;
But nocht in all revolving time
Can gladness bring again to me.

I am a bending agèd tree,
That long has stood the wind and rain,
But now has come a cruel blast,
And my last hold of earth is gane:
Nae leaf o' mine shall greet the spring,
Nae simmer sun exalt my bloom;
But I maun lie before the storm,
And others plant them in my room.

I've seen so many changefu' years,
On earth I am a stranger grown;
I wander in the ways of men,
Alike unknowing and unknown:
Unheard, unpitied, unreliev'd,
I bear alane my lade o' care,
For silent, low, on beds of dust,
Lie a' that would my sorrows share.

And last (the sum of a' my griefs!)
My noble master lies in clay;
The flow'r amang our barons bold,
His country's pride, his country's stay:
In weary being now I pine
For a' the life of life is dead,
And hope has left my agèd ken,
On forward wing for ever fled.

Awake thy last sad voice, my harp!
The voice of woe and wild despair;
Awake, resound thy latest lay,
Then sleep in silence evermair!
And thou, my last, best, only, friend,
That fillest an untimely tomb,
Accept this tribute from the bard
Thou brought from fortune's mirkest gloom.

In poverty's low barren vale,
Thick mists obscure involv'd me round;
Though oft I turn'd the wistful eye,
No ray of fame was to be found:
Thou found'st me, like the morning sun
That melts the fogs in limpid air;
The friendless bard and rustic song
Became alike thy fostering care.

0 why has worth so short a date
While villains ripen grey with time?
Must thou, the noble, gen'rous, great,
Fall in bold manhood's hardy prime?
Why did I live to see that day,
A day to me so full of woe?
0 had I met the mortal shaft
Which laid my benefactor low! 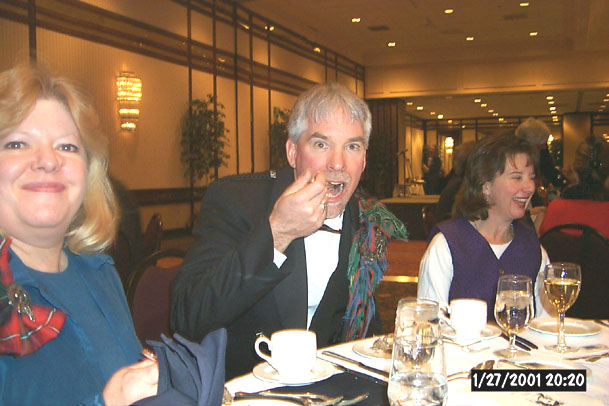 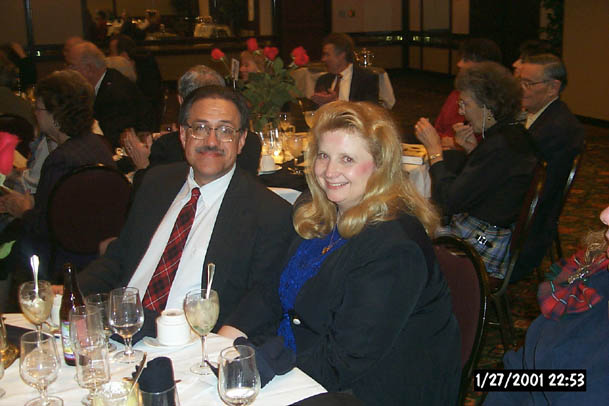 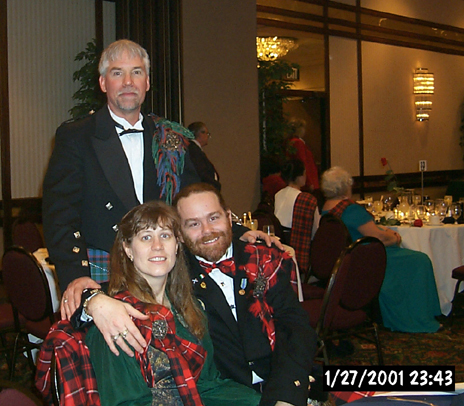 Below, Clan Cunningham Society members Michael & Lyn Tibbedeaux relax and enjoy the Scottish country music after a turn on the dance floor. 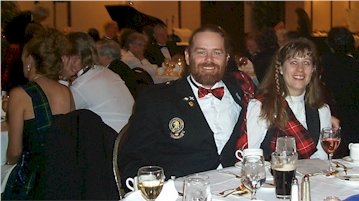 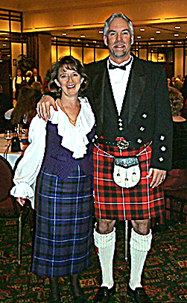 Every year on the weekend following Labor Day weekend the Longs Peak festival is held in this Rocky Mountain Colorado town. Below is a photo of a Montgomery and a Cunningham discussing in the typical highland fashion the finer points of the three hundred year old feud between these two clans which took place throughout the District of Cunninghame centuries ago.

Back to top of page.